Style Mission 2009 on Thursday 22 October, is a flashback in time to Melbourne in the 1930s - a city of contrasts, a legendary horse, the great depression and then there was the fashion.

Join leading fashion designers including Jenny Bannister, Ivan Gomez and Luxe as they select garments from Sacred Heart Mission Op Shops and embellish them with their own signature style to create dazzling one-off pieces for sale and auction.

This stylish cocktail party at KPMG's elegant Banking Chamber on Collins Street is a must attend event on Melbourne's social calendar and tickets will sell fast! 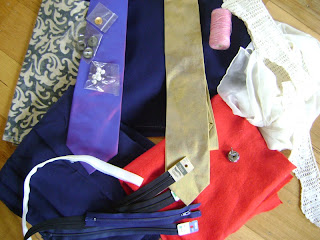 Here are some bargains picked up from the local Op Shop, handily opposite the furniture warehouse where I was checking out beds for youngest son. This would have to be my favourite op shop for picking up great stitching supplies. For $14 I scored over a metre of good quality wool gaberdine, 2 metres of a silky polyester (feels very similar to the fabric in my favourite Basque dress and would look sensational printed with a gold motif), a fat quarter of a toning batik cotton (also good quality) - I can see a bag happening here, 4 new zips, 2 silk ties, a chiffon scarf, large piece of red synthetic felt, assorted buttons, a reel of a very nice variegated pink cotton, a spare bobbin case for my Janome (I can now use this for fiddling with the tension), a thin strip of velcro and over a metre of hand crocheted cotton edging.
What a haul!
GO CATS
Posted by Aussie Jo at 13:53 1 comment:

OP SHOP TOURS For the FRINGE 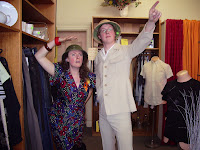 There are two op shop tours running in the Melbourne Fringe Festival this Saturday the 26th of September (for those who wish avoid grand final madness) and next Saturday the 3rd of October.

BUT wait for it..........Two double passes to give away on the op shop tour. The first two I Op therefor I am readers to email will receive a double pass to jump on board. Just email me at jo@opshoptoursaustralia.com with your name and preferred date and I will notify the winner.

Running Amok at Savers and Vinnies!

I got some good news today from Centrelink (I'm eligible for a pension) so with a few hundred extra dollars in the bank, I figured what better way to start spending than at an opshop! Actually, it wasn't quite like that. I broke the glass carafe that goes with our coffee maker, and haven't been able to replace it. So I thought I'd start looking in op shops, as I have seen them there before. However, Murphy's Law prevailed today, and there was not one coffee carafe to be seen. Well, I was there, so I may as well look at everything else. So glad I did! At Savers in Greensborough, I bought two pairs of NEW sneakers for $7 a pair, and a pair of lovely soft slipper/shoes for $4. Second hand, but in good nick, and sooooo comfortable on my aching feet tonight! 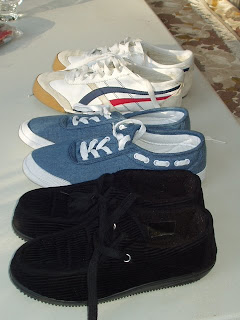 I wasn't going to buy any clothes, but found these two blouses for around $5 each, and decided to get them to put away for summer. I've already got a black teeshirt, but these are a bit more dressy than that, although these photos don't do them justice. 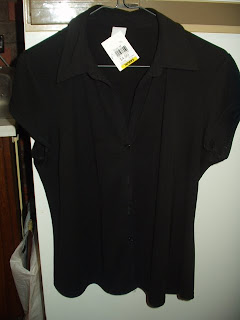 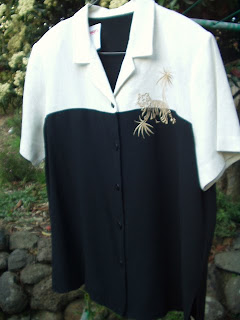 The watch I have been wearing for the last 5 years or so is an Avon watch, and for $12 it has done really well; in fact is still going. But the face is scratched and it has never been easy to read, so I lashed out on this nice big watch with figures instead of dots, and a moon phase thing as well, for $15. The little cat ear rings cost $10, more than I realised, until I'd paid for them, bearing in mind that I don't wear ear rings! I bought them to use as embellishments on crazy patchwork and other craft stuff. 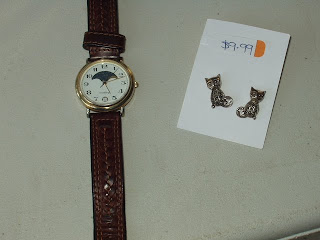 I'm always on the lookout for bias binding. I've got a box full of it already in a variety of colours, and I've got plans for most of it! This lot cost me $4. 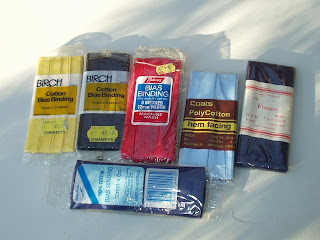 I also bought two embroidered pictures at Savers, but have put them on my Linens blog here.
Down the road at Vinnies, still looking for the elusive coffee jug, I found these:
Some more stunning ties to add to the bulging bag of ties in my craft cupboard, $2 each. 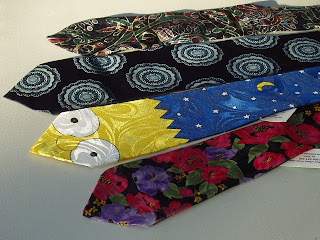 Two glasses to replace the ones that have been broken lately (50c each), and a Pyrex dish ($8) in exactly the size I've been after for ages! I have a pottery 'lasagne' dish like this, but it has a huge crack, and I know one day, a casserole will end up all over my oven when the dish breaks. 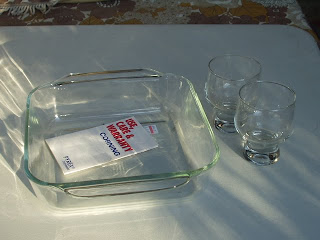 This cute coin purse ($1)will be offered to a friend who loves anything British. If she doesn't want it, I'll be happy to keep it. 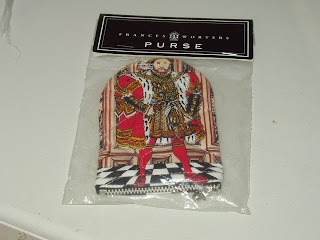 The guy at Vinnies asked if I wanted a bag for the glassware and ties, and I said yes please, so he pulled this one out from under the counter - much nicer than an ordinary plastic bag! 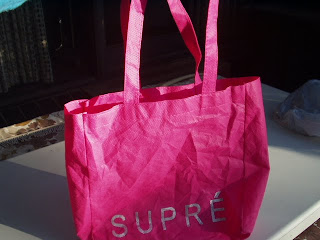 Yes, I've been wondering where everyone has been of late too (Running Amok...) and thought if I displayed some recent acquisitions maybe others will follow suit. 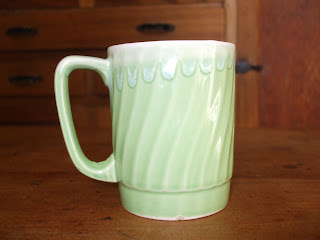 This be the cup from which I drinks me tea every day. 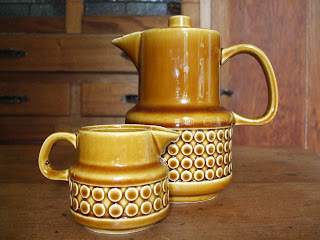 This here Gold is a milk jug and coffee pot. 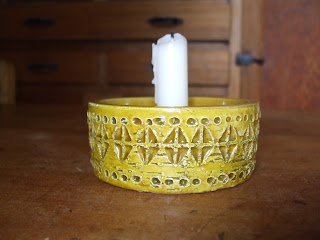 Assists in wench seeking at night. 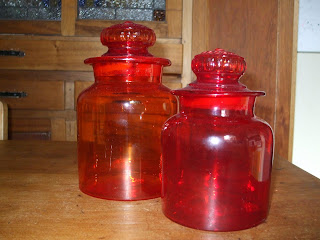 One orange, one red - I'll have ye head. 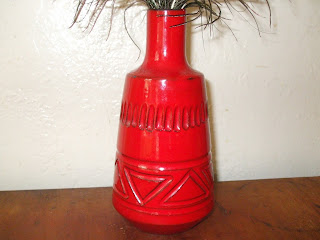 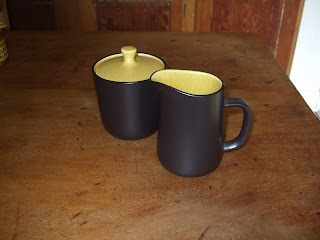 Brief but punchy post, no? Short on time. Have no idea what's with the pirate speak, sorry.

Another new (to me) oppy 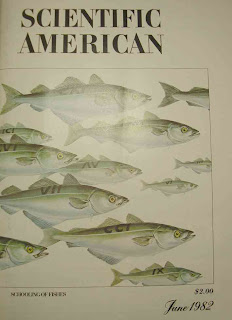 I went to meet friends for morning coffee in Brighton, just opposite the St Andrews Church Op Shop - just too hard to resist popping in before time on my carpark ran out. A Scientific American, 1982, from the free basket, just because I like the fish. May be used in a collage. There are some great images of brains inside, too. 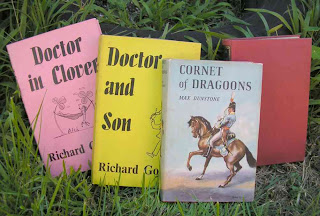 Continuing my enjoyment of Richard Gordon's Doctor... series with two I haven't read before, $1 each. A red covered novel for my ongoing art project, 50c, and "Cornet of Dragoons" because I loved the cover, also 50c. I may use the Dragoon dustjacket for collage or drawing over, and the book also goes into my stash of books for the mysterious project. 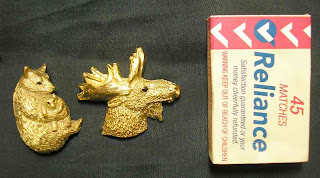 Two brooches, bear and bub and Mr. Moose, $1 each. Matchbox for scale. There was a basketful of these brooches on the counter.

There were three or four issues of Golden Homes, too, which I'm assuming is similar to the popular Golden Hands series, but I hadn't seen the Homes before.

Where is everyone? All op-shopped out? Hibernating for the winter? I love seeing the treasures others find.
Posted by Running Amok With An Ax at 15:54 1 comment:

Labels: bling, books
Newer Posts Older Posts Home
Subscribe to: Posts (Atom)
A collaborative blog about op shopping in Melbourne, Australia - let everyone know about the treasure you've found, alert the world to that Akira Isogawa dress that didn't quite fit, and check out where you can get your op shop fix on a Sunday.