I did a spot of op-shopping this weekend and found this gorgeous retro print of a little boy and his dog standing in the rain. I think it is a “kitsch” type of print but I’m just guessing from what little research I’ve done on the net . It is very “vintage” and I thought it would be a perfect addition to the nursery – not to mention too cute to pass on. 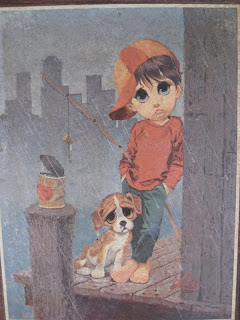 There is a run of good opshops along this road. Vinnies, the Salvos, and another which supports a local charity. I dropped into each of them yesterday while I was over that side of town (I'm not often over there), and bought these few items:

Wrist watch marked at $20, I paid $10. The metal on the band of my old watch has gone strange, kind of gritty, and is uncomfortable against my skin, so I thought it was about time for a new one. I like plain clear faces on watches, with numerals instead of dots, so this is ideal. The Salvos were having a 'everything is half price' day, otherwise I might not have paid $20 for it. This is one of those cards that has digital sound when you open it - this one being kookaburras laughing. They are one of my favourite birds, so for $4 I grabbed it, just for fun. 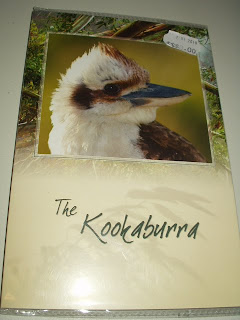 I've been looking for something cool to swan around the house in on hot days, and would have preferred cotton, but it is very hard to find 100% cotton clothes these days, so I settled for this shift thingy for $6. 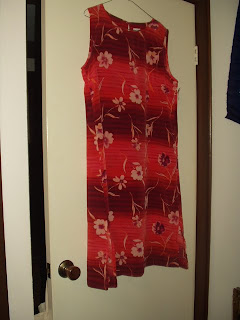 I've lost some of these hooks from our curtains over the years, and have never got around to replacing them, so when I saw a box of these for 20c each, it was finally time to fix those darn curtains! 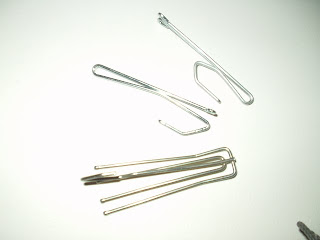 Some more goodies at the Brotherhood.

I'd arranged to meet friends for coffee, and they said if they weren't in the cafe, they'd be in the opshop nearby, and sure enough, that's where they were. I'd been in the same shop two days ago, but for a small shop they have a fast turnover, and there is always new stuff!
I found this really ugly blouse for $1, with pretty machine embroidered Xmas motifs on it. 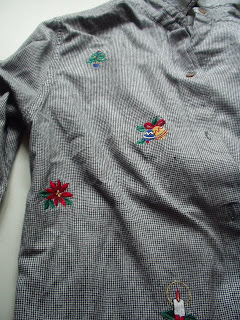 When I got home, I cut out the motifs and cut off the buttons. The rest of the shirt is in hubby's rag bag. 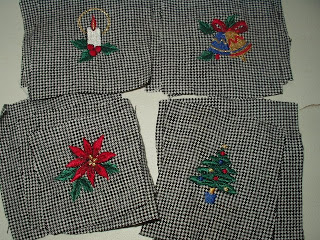 Somebody had apparently been to the USA and bought a heap of souvenir cloth badges, but never got around to sewing them on to articles of clothing. I'll be cutting them up to embellish fabric postcards, ATCs, or other patchwork. 40 cents each. 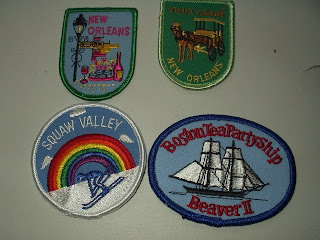 I love anything with Peacocks, so I wasn't going to leave this little brass dish beind - 50 cents! 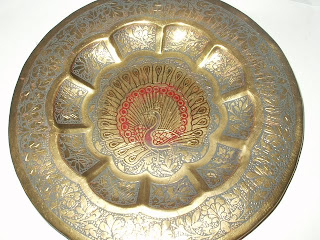 There was a basket full of laces for $1 a roll, so I grabbed these to share with a friend in the USA who loves laces. The lady at the counter said "Oh that lace has been going out the door today!" and I wondered what else I'd missed out on! 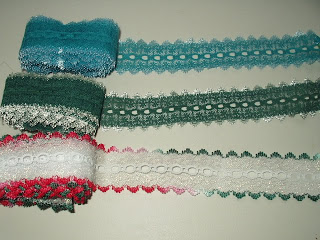 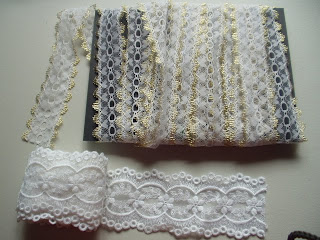 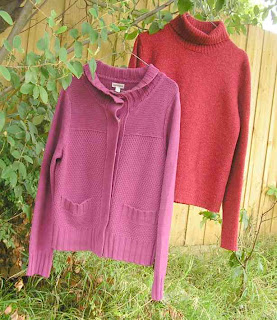 These finds are from a trip to Frankston in December, to take advantage of one of Saver's half price garment Mondays. There are enough op shops in the main shopping area to make a day trip a worthwhile exercise - I think I visited five, including Savers. Above are a jumper and cardigan which I intend to deconstruct for the yarn. You can't ever have too much yarn :) 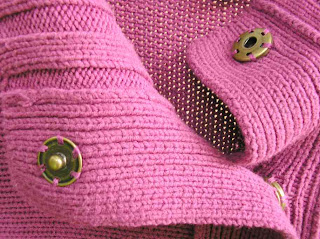 The purple cardi has giant snaps down the front, which I'll also reclaim and repurpose. I'd priced snaps about this size in the haberdashery section a while back and they retail for at least $1 each, and I have six of them now. Both knits were two or three dollars each. 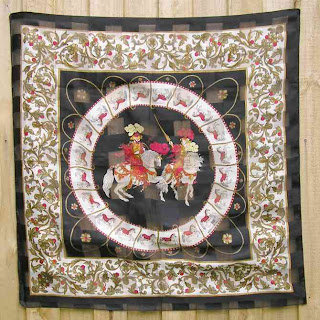 A large scarf featuring a gorgeous print of horses. I tried to convince the checkout operator that scarves are apparel, but apparently they're considered accessories and not included in the half price offer. Still a bargain at $3.95, I think. I may turn this one into a halter top, if I can bear to cut it. 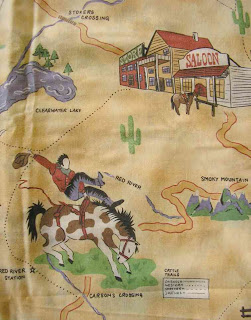 A cowboy motif doona cover that I'll use as fabric. I couldn't resist the cute print. Enough here to make a shirt, a skirt and still have some left over. Can't remember the price exactly, but it was
about $5. 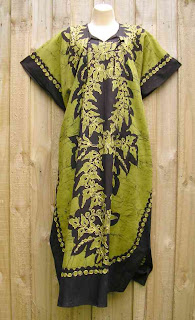 A gorgeous green caftan, for me to wear in the heat. Cool and comfortable now that I've altered it to my satisfaction: it was a little tight over the Rack of Doom, so I let it out at the side seams only to find that this rendered it rather shapeless in other areas. So I added a couple of waist ties to tie at the back and now I love it. $9 at Savers. 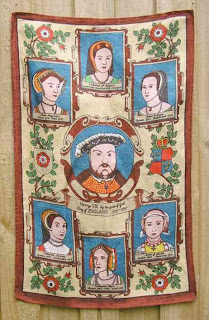 An "Eight Wives of Henry the VIII" tea towel, to be refashioned into a tote bag. $1.95.
(Edited: Obviously that was meant to be "Six Wives of Henry VIII" - I think Melbourne's hot and muggy spell has damaged my brain) 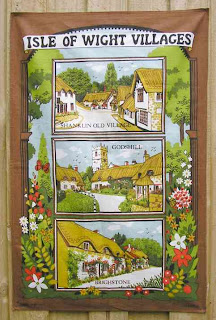 An Isle of Wight tea towel, also to be refashioned into a tote bag. Also $1.95. Both tea towels from Savers.

On the same trip, I also bought ten balls of black mohair yarn, at $1 a ball in St Vinnies, plus a
set of dominoes for $2 in another op shop (can't remember which, memory failure due to hot weather). Like I wrote earlier, can't have too much yarn! The dominoes are intended for a jewellery project I have in mind, and they came in a little wooden box that I'll use for something else. A good day.
Posted by Running Amok With An Ax at 20:08 4 comments:

Did anyone here go on the Opshop Tour?

I would love to read about it if you did. I'd love to go on a trip like that, but I really don't need to...I do my own opshop tours without any help, lol.
Popped into the local Brotherhood shop again today and found these goodies. It really is a neat little shop, they always seem to have new stuff coming in, and put it on the shelves within minutes of receiving and pricing it! They are just down the road from me; too close really....I can't resist dropping in when I walk by ;-)

This cotton hand embroidered cloth was 40 cents. I've got hundreds, but this is so beautifully stitched, I couldn't leave it behind for that price. 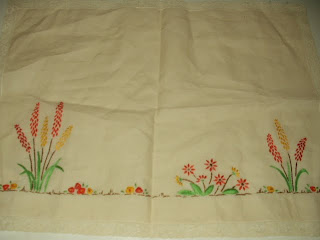 I fell in love with this enamel brooch for $4, thinking I would use it to embellish a crazy patchwork block, but when I got it home and had a closer look, I decided no, it's too good for that, so it's in my jewellery box. 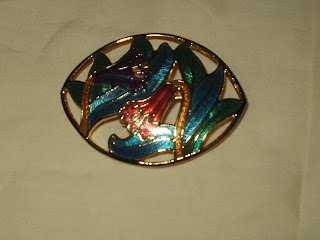 Here is the brooch again, with a bead necklace for 50 cents. I would normally not have looked twice at that, but have a look at the top I was wearing today - perfect match!! 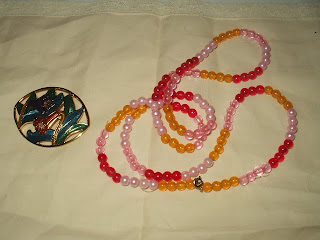 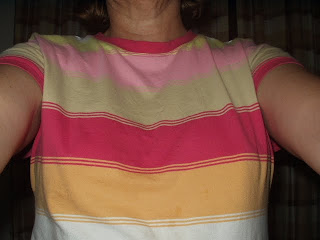 Newer Posts Older Posts Home
Subscribe to: Posts (Atom)
A collaborative blog about op shopping in Melbourne, Australia - let everyone know about the treasure you've found, alert the world to that Akira Isogawa dress that didn't quite fit, and check out where you can get your op shop fix on a Sunday.